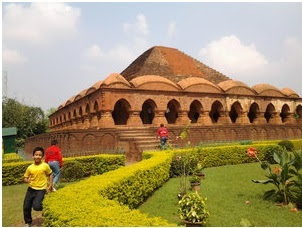 There are many travelled – untraveled spots in the state of West Bengal. It is one of the few states of India which has all - Historic monuments, beaches, mountains and jungles.

One among them is Bishnupur, which has remained mainly an untouched destination by the people outside of Bengal.

Bishnupur is a small town in Bankura district of West Bengal, India, 132 km away from Kolkata. The uniqueness of this place is its terracotta temples built in 17th and 18th Century. The architecture depicts the socio economic condition of the era. Numerous big and small temples still exist in the city.

Five of us planned to visit the place in October 2014. Kolkata to Bishnupur can be a same day return trip. However, we wanted to spend time in the serenity of Shaniniketan, hence made the trip 3 days long.

We started our road journey at 8am only to repent later. We missed to enjoy the free roads of Kolkata and also missed to see the colour of River Ganga during sunrise. 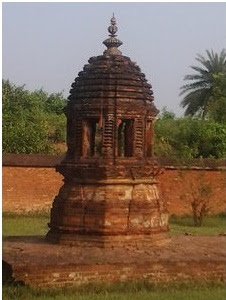 Never mind, we crossed the hustle and bustle of cities in some time and reached to the countryside which we call suburbs. We took Durgapur express way route to avoid the bumpy ride of the other route.

For some time, we all just quietly enjoyed the fresh breeze, beauty of long stretched paddy field, white wild flower covering (called Kash Phool in Bengali blooms in early October in eastern part of India) the sides of the roads.

We decided to have our breakfast at around 9:00 – 9:30am after reaching a place named Shaktigarh near Burdwan city. Although entire Bengal is famous for wide variety of sweets, this place is the originator of a sweet named Langcha.

We noticed a unique thing there. All the eating joints (approx. 25-30 in number) on both sides of the road is named after the sweet Langcha like Langcha Dham, Langcha Bhavan, Langcha kutir etc. ( Dham, Bhavan are all synonyms “house”.)

We entered in one of them. Aroma of hot Kachori and Bengali potato curry made the sound of our growling stomach quite audible. I must admit that the taste and enjoyment of eating local cuisine on roadside joints is unparalleled. We signed off our heavy breakfast session with famous Langcha. 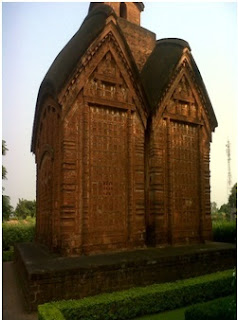 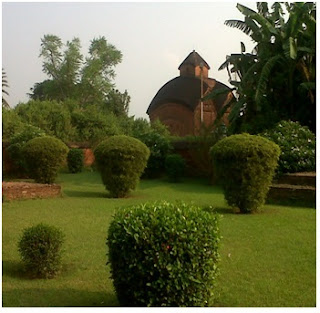 Kids growing up in metropolitan city are generally deprived of the lovely view of the nature, so they were the one enjoying every moment of the journey. Right from looking at the grazing cattle, herders sitting on a small rock with a stick in hand, men and women working in the field, bullock carts and many more.

It was around 12pm, when our vehicle entered onto the hard road. We knew this stretch of few kilometres is going to bother us and as always we will keep complaining throughout.

However, for a change this time we decided to concentrate more on the beauty of the place and less on the condition of the road. And we agreed that the nature’s beauty subdued the agony. We passed by small villages, long stretched foliage, bamboo trees, small winding rivers…….
we crossed Bankura town and the small station of Bishnupur.

Closer view of the art 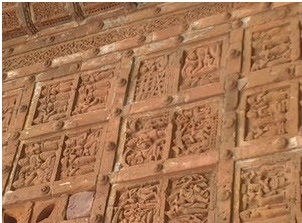 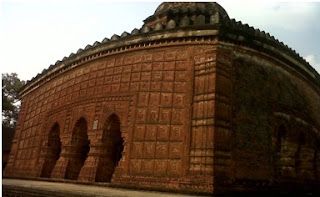 As we entered Bishnupur, started enquiring about the way to the temples. We had an impression that being small place we will find the way easily but to our surprise we got only one reply “Which temple?”
Finally a senior person obliged us by showing us the route of one of the temples- Rasmoncho.. He asked us to further enquire there. That was a fair and honest suggestion. By then we understood that there are numerous temples known by different names (It is better to keep a route map to Rasmoncho - google to find one, from there hire a guide and no hassle thereafter.)

During this quest, kids got bored and started showing the boredom syndrome as feeling hungry. But our aim was to visit the spots so somehow with additional junk eateries chips and cold drink kept them occupied. Frankly speaking the last half an hour was quite annoying for the adults as well.

However, fatigue, anger everything vanished the moment we saw the beautiful temple – our first stop.

We hired a guide who took us to12 different temples each of them with unique art and different stories depicted on the walls.

We also visited one of the rarest temples of Hindu goddess kali built by Hindu king. The idol is famous in the name of CHIINOMASTA KALI (CHHINO meaning separated; Masta came from the word Mastak meaning head).

Though our eyes were stuck on the art of old century; but could not give a miss to the local handicraft being sold outside every temple.
We were quite behind our schedule, still could not resist to buy few articles made out of coconut shell and burnt soil.

We had earlier planned to have our lunch at Durgapur but it was already close to 3pm and there was no way kids could have waited for another hour. So we had our lunch in one of the restaurants there.

After lunch, we left for our next destination. We decided to come back again to see another set of 10 temples.

We concluded our journey by visiting shiv temple near Bardhawan railway station. It is a unique temple complex. There are 108 Lord Shiva temples, arranged in two rows and shaped like traditional Bengali mud hut. Pious end of a beautiful journey. 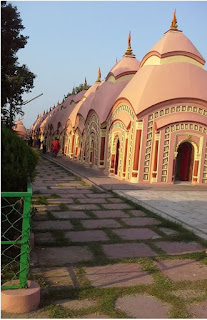 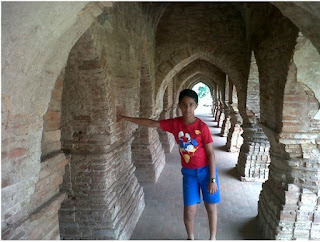 About me:   My name is Sanchita Sengupta. I have been associated with apparel/fashion industry from past two decades. Travelling, reading, Writing are my passion. I am writing travelogues since my childhood days.
Posted by Travel Another India at 12:55 3 comments: Links to this post

Would you like to blog about your travels? Writings, pictures, video, doodles... anything goes! Send it to us at writetous
@travelanotherindia
.com