Again Mademoiselle Mumbai called me. This time it was through my cousin, when she declared, she's getting married!

Obviously a trip to Mumbai calls for its own list of places to be visited. Much unknown to many, is that Mumbai has its own bunch of ancient caves & 15-17th C AD forts. That includes caves in Kanheri, 2 caves in Jogeshwari etc and forts in Sewri, Sion, Mahim, Bandra, Madh, Vasai etc built by Portuguese & British. I wanted to see at least one of these forts if not all, and Vasai Fort was first in the list.

This is the first ever time I saw a fort of this kind. I've seen the Chenji / Gingee fort in Tamil Nadu and Golkonda Fort in Hyderabad, but the construction of those were very different, built with huge boulders of granite. This was built with some smaller granite, bricks, etc. The architecture is a major difference. The earlier places were South Indian and Nawabi architecture, while this was purely western, Portuguese to be precise. It was awesome. It was in ruins, still it was majestic. 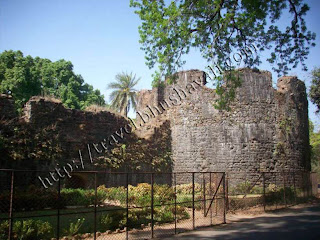 I managed to spot the Fort beside a temple. An ASI office is at the entrance. It was fenced by ASI. After spending almost more than 15-20 mins in there, I realized this was just one of the 2-3 sections of the fort. I moved over to the 2nd one.

This was much more maintained with a garden in the front and a swivel door and heavier fence. It was all the more majestic & bigger than the earlier one. I couldn't help but wonder how fabulous it would have been when it was in use. I was visualizing people dressed in Portuguese & Indian outfits of different races, walking about & talking in the huge premises!

The flooring has been re-done by the ASI and some broken places have been filled and renovated. There were some little openings & paths that led nowhere. Earlier might have been doors, who knows?!

Some planks with reliefs sculpted on them were kept aside. Some more panels of relief sculptures were still intact on the walls.

Some had written words - No I couldn't read the language! All of the windows and doors were arched in true arches - that's one fabulous aspect of architecture.

One thing that totally astonished was there were no bats, no monkeys, no mongrels and no stupid humans too (read - smoking drunkards or just college bunking brats). Not even broken whiskey bottles - that's astonishing, I mean really, really astonishing. Just a few pigeons, nothing else!!! Behind this building was a huge wild mango tree. I had seen wild mango trees only in Parappalaru before this!

Further walking ahead lead to a school here, while is located within the compound of the fort!! Beyond that is the village. Women clad in traditional Marathi saree drape with Mangalsutras and Men in the traditional triangular lungi tie-dyed in bright colors were walking about. Enroute was a mini dhobi-ghat with about 20 women washing clothes here - that itself was a colorful sight with their colorful outfit and all the more colorful garments that they were washing. In a green environment, with granite fort background, so much of colors, was an amazing visual treat!!!

Autos can be taken from the station to the Fort. Mumbai autos run on metre.

Refer to the fort locally as Vasai Khila, as in the local language, so they understand! 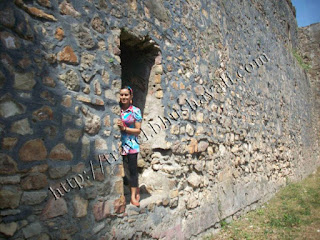 Posted by Travel Another India at 12:37

Would you like to blog about your travels? Writings, pictures, video, doodles... anything goes! Send it to us at writetous
@travelanotherindia
.com